Billy the Kid and the Vampyres of Vegas: A Lost Story from the Secrets of the Immortal Nicholas Flamel 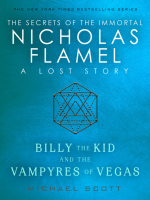 Description
Nicholas Flamel appeared in J.K. Rowling's Harry Potter—but did you know he really lived? And he might still be alive today! Discover the truth in Michael Scott's New York Times bestselling series the Secrets of the Immortal Nicholas Flamel with Billy the Kid and the Vampyres of Vegas, an ebook original.Years before Sophie and Josh Newman met Nicholas Flamel, two legendary warriors fought together for the first time. Billy the Kid and Scathach the Shadow. Now that lost story can be told . . . Billy the Kid is immortal. And being immortal means following unpredictable paths. With this exclusive eBook, Michael Scott offers readers a never-before-seen short story from the world of the bestselling series the Secrets of the Immortal Nicholas Flamel: the tale of how Billy the Kid and Scathach meet for the first time and join forces against the unseen, deadly and eternally hungry vampyres who control the city of Las Vegas—where Scathach must face her greatest fear."Fans of adventure fantasies like Rick Riordan's Percy Jackson and the Olympians series will eat this one up." —VOYA Read the whole series! The Alchemyst The Magician The Sorceress The Necromancer The Warlock The Enchantress
Also in This Series