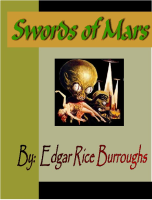 Swords of Mars is the eighth book in the Edgar Rice Burroughs' Martian series. It was featured in six issues of the Blue Book magazine in 1934-1935. John Carter reprises his role of hero as he vows to bring an end to the Assassins Guild. He must travel to one of the moons of Barsoom, Carter then creates a race of secret super assassins to destroy this powerful Guild of Assassins. He ventures to the city of Zedong in a fierce attempt to overthrow Ur Jan the leader of the Assassins.

There are many fantastic characters and galaxies in this compelling spy story in this edge of your seat science thriller.

Please Note: This book is easy to read in true text, not scanned images that can sometimes be difficult to decipher. This eBook has bookmarks at chapter headings and is printable up to two full copies per year.