Blind Descent: The Quest to Discover the Deepest Place on Earth 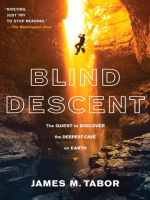 "Heart-stopping and relentlessly gripping. Tabor takes us on an odyssey into unfathomable worlds beneath us, and into the hearts of rare explorers who will do anything to get there first."—Robert Kurson, author of ShadowDiversIn 2004, two great scientist-explorers attempted to find the bottom of the world. American Bill Stone took on the vast, deadly Cheve Cave in southern Mexico. Ukrainian Alexander Klimchouk targeted Krubera, a freezing nightmare of a supercave in the war-torn former Soviet republic of Georgia. Both men spent months almost two vertical miles deep, contending with thousand-foot drops, raging whitewater rivers, monstrous waterfalls, mile-long belly crawls, and the psychological horrors produced by weeks in absolute darkness, beyond all hope of rescue. Based on his unprecedented access to logs and journals as well as hours of personal interviews, James Tabor has crafted a thrilling exploration of man's timeless urge to discover—and of two extraordinary men whose pursuit of greatness led them to the heights of triumph and the depths of tragedy. Blind Descent is an unforgettable addition to the classic literature of true-life adventure, and a testament to human survival and endurance."Holds the reader to his seat, containing dangers aplenty with deadly falls, killer microbes, sudden burial, asphyxiation, claustrophobia, anxiety, and hallucinations far underneath the ground in a lightless world. Using a pulse-pounding narrative, this is tense real-life adventure pitting two master cavers mirroring the cold war with very uncommonly high stakes."—Publishers Weekly (starred review)"A fascinating and informative introduction to the sport of cave diving, as well as a dramatic portrayal of a significant man-vs.-nature conflict. . . . What counts is Tabor's knack for maximizing dramatic potential, while also managing to be informative and attentive to the major personalities associated with the most important cave explorations of the last two decades."—Kirkus Reviews