The most powerful idea in... »

The most powerful idea in the world: a story of steam, industry, and invention 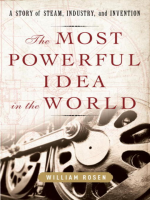 Description
The sweeping true story of how the steam engine changed the world, from the acclaimed author of Miracle Cure

If all measures of human advancement in the last hundred centuries were plotted on a graph, they would show an almost perfectly flat line—until the eighteenth century, when the Industrial Revolution would cause the line to shoot straight up, beginning an almost uninterrupted march of progress.

In The Most Powerful Idea in the World, William Rosen tells the story of the men responsible for the Industrial Revolution and the machine that drove it—the steam engine. In the process he tackles the question that has obsessed historians ever since: What made eighteenth-century Britain such fertile soil for inventors? Rosen’s answer focuses on a simple notion that had become enshrined in British law the century before: that people had the right to own and profit from their ideas.

The...
Also in This Series