Roses Under the Miombo Trees »

Roses Under the Miombo Trees: An English Girl in Rhodesia 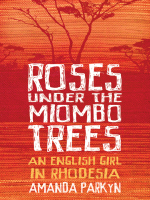 Amanda Parkyn's memoir focusses on her life in 1960s Southern and Northern Rhodesia. Based on the letters she wrote to her parents back in England, Roses Under the Miombo Trees covers significant events in Rhodesia's history as uniquely witnessed through the eyes of a young naïve housewife Amanda Parkyn, a young English bride, finds herself in 1960s colonial Africa. Life as wife of a sales representative means frequent change, as he is posted to progressively smaller communities, first in Southern Rhodesia pre-Ian Smith, then north to the tip of Lake Tanganyika, in a Northern Rhodesia about to be granted its independence. She writes home regularly as she learns to keep house, to become madam to a succession of servants, as she eagerly seeks to fit into a white society very different from that of her upbringing. Starting a family brings new challenges as she must learn to make do in ingenious ways to stretch their tiny budget. Back in England her mother sends frequent parcels of everything from shoes to toys and romper suits to Christmas cakes, keeping her daughter's airmail letters in an old leather document case. Forty years later Amanda has revisited these letters, and in Roses Under the Miombo Trees weaves a narrative around the voice of Amanda's young self and her memories of the time, setting the story within its historical and political context. Roses Under the Miombo Trees describes the carefree enjoyment of a privileged white lifestyle in the sunshine of Southern Africa, the fun and resourcefulness of communities making their own entertainment, the support and friendship young wives and mothers give each other so far from home. But she also uncovers a young woman's hidden unease at the foreignness of it all, of being white among black Africans, and must face her young self's casual racism and colonial attitudes. The text is spiked with short poems which, in a different 'voice', reveal other aspects of the story. Finally the author asks what might have happened to those she knew, in countries now so different from when she lived there.