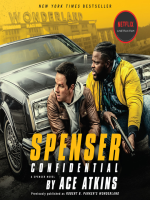 Description
NOW A NETFLIX FILM STARRING MARK WAHLBERG AS SPENSER!
Old friends. Small favors. Bitter rivals. Stirred together, it all makes for one explosive cocktail in this New York Times bestselling thriller that has Spenser feeling the heat...
Henry Cimoli and Spenser have been friends for years, yet the old boxing trainer has never asked the private eye for a favor. Until now. A developer is trying to buy up Henry's condo on Revere Beach—with a push from local thugs. Soon Spenser and his apprentice, Zebulon Sixkill, are on the trail of a mysterious woman, a megalomaniacal Las Vegas kingpin, and a shady plan to turn a chunk of land north of Boston into a sprawling casino. As alliances shift and twisted dreams surface, the Boston political machine looks to end Spenser's investigation one way or another—and once and for all.
Previously Published as Robert B. Parker's Wonderland
Also in This Series