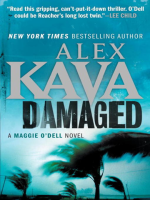 Description
In this thrilling installment of the New York Times bestselling series, Special Agent Maggie O'Dell puts herself in the path of a hurricane to investigate a mysterious murder.
While the Coast Guard is preparing Pensacola Beach for a severe hurricane, they find an oversized fishing cooler filled with body parts tightly wrapped in plastic floating offshore. Special Agent Maggie O'Dell is sent to investigate, despite the fact that she is putting herself in the projected path of the hurricane. She's able to trace the torso in the cooler back to a man who mysteriously disappeared weeks earlier after a hurricane hit the Atlantic coast of Florida. How did his body end up six hundred miles away in the Gulf of Mexico? Using her signature keen instincts and fearless investigating, O'Dell discovers Florida's seedy underworld and the shady characters who inhabit it. Damaged is Alex Kava's most terrifying thriller yet.
From the Paperback edition.
Also in This Series