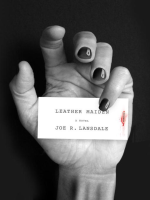 After a harrowing stint in the Iraq war, Cason Statler returns home to the small East Texas town of Camp Rapture, where he drinks too much, stalks his ex-wife, and takes a job at the local paper, only to uncover notes on a cold case murder. With nothing left to live for and his own brother connected to the victim, he makes it his mission to solve the crime. Soon he is drawn into a murderous web of blackmail and deceit. To makematters worse, his deranged buddy Booger comes to town to lend a helping hand.
Also in This Series