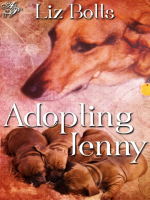 Twelve-year-old Joanie loves animals. Her family often fosters animals for a local rescue operation. Joanie desperately wants more pets, but her father remains stalwart in his opposition to this idea. Because of this impasse the relationship between Joanie and her father is rocky.

One night the rescue organization calls with a unique situation. A mother dog who has lost her puppies needs to be fostered, along with a litter of puppies that have lost their mother. Joanie's mom enthusiastically agrees to attempt to get the mother and puppies to adopt one another.

As the first night with the puppies unfolds, Joanie finds herself alone with her dad as they monitor and feed the puppies. Joanie's dad surprises her by opening up and sharing stories with Joanie. She finds herself seeing her father in a new light. By the end of the night Joanie has rethought how she sees her father, and her father ends up surprising her by changing his attitude about getting more pets.

Adopting Jenny might just be the best thing that has ever happened to their family.