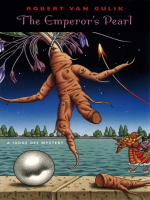 It all begins on the night of the Poo-yang dragonboat races in 699 A.D.: a drummer in the leading boat collapses, and the body of a beautiful young woman turns up in a deserted country mansion. There, Judge Dee—tribunal magistrate, inquisitor, and public avenger—steps in to investigate the murders and return order to the Tang Dynasty.

In The Emperor's Pearl, the judge discovers that these two deaths are connected by an ancient tragedy involving a near-legendary treasure stolen from the Imperial Harem one hundred years earlier. The terrifying figure of the White Lady, a river goddess enshrined on a bloodstained altar, looms in the background of the investigation. Clues are few and elusive, but under the expert hand of Robert van Gulik, this mythic jigsaw puzzle assembles itself into a taut mystery.

"If you have not yet discovered Judge Dee and his faithful Sgt. Hoong, I envy you that initial pleasure which comes from the discovery of a great detective story. For the magistrate of Poo-yang belongs in that select group of fictional detectives headed by the renowned Sherlock Holmes."—Robert Kirsch, Los Angeles Times

"The title of this book and the book itself have much in common. Each is a jewel, a rare and precious find."—Atlanta Times