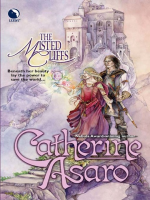 Award-winning author Catherine Asaro, creator of The Skolian Empire, returns to the world of Aronsdale, a place rich with magic and power.

One generation after war had nearly destroyed three nations, evil was returning. And only Mel Dawnfield's daring sacrifice could stop it...

The promise of peace rested on this young woman's noble vow: to marry Cobalt the Dark— heir to a family of legendary cruelty. With only her uncontrolled spells to guide her, isolated in Cobalt's solitary home in the Misted Cliffs, knowing poisoned blood ran through her husband's veins, Mel struggled to embrace her unexplored mage powers and unveil the light in her shadowy new world— including the radiance hidden in her husband's soul. For her enemies were gathering strength and they would soon unleash the darkest of evils in the name of war.

In the final battle, Mel's ability to harness her magic would mean the difference between a harmonious world... and annihilation.