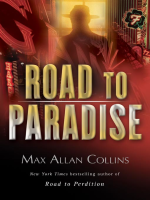 Collins chronicled the gripping story of one young boy's travels with his gangster father in the New York Times bestseller Road to Perdition, then led his readers along the unforgettable Road to Purgatory -- a tale of this same boy, all grown up. Now, in his most powerful work to date, we again meet Michael Satariano and travel with him as he faces the most difficult and heartbreaking struggle of his life.

Lake Tahoe, 1973: Michael Satariano -- who as a young man fought the Capone mob in Chicago -- has reached a comfortable middle age, with a loving wife at home, a talented teenage daughter in high school, and a son earning medals in Vietnam. Now running a casino for the mob, Michael thinks he's put his killing days behind him -- after all, he's made a respectable life for himself and his family . . . and plenty of money for the boys back in Chicago. So when godfather Sam Giancana orders him to hit a notoriously violent and vulnerable gangster, Michael refuses. But when the hit goes down anyway, Michael is framed for murder; to save his family, he must turn state's witness under the fledgling Witness Protection Program.

Relocated to the supposed safety of Paradise, a tract-housing development in Arizona, Michael soon finds himself facing a wrath so cruel that even the boy raised by a hitman father is unprepared. And with his teenage daughter in tow, Michael must return to the road and a violent way of life he thought he had long left behind.

In this stunning third installment of a trilogy so gripping and masterfully written that it could only come from "[among] the finest crime writers working today" (Milwaukee Journal Sentinel), we once again have a spellbinding window into a time of heroes and villains -- and, above all, a journey along a road on which a man's greatest crimes are all a part of his lifelong struggle for redemption.