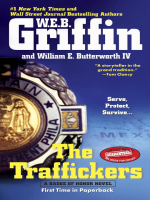 Description
Homicide Sergeant Matthew Payne is used to murder, but lately there's been an awful lot of it in Philadelphia. A gangland shooting in a popular tourist location has left six dead, most of them innocent bystanders, and days later the body of a headless Latina turns up in the Schuykill River. Everybody assumes they're not related, but Payne can't shake the hunch that there's something more to it--and that hunch leads him far from the City of Brotherly Love to the Texas-Mexico border.
Also in This Series