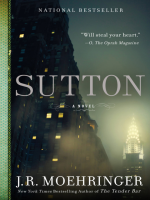 Description
"What Hilary Mantel did for Thomas Cromwell and Paula McLain for Hadley Hemingway . . . Moehringer does for bank robber Willie Sutton" in this fascinating biographical novel of America's most successful bank robber (Newsday).Willie Sutton was born in the Irish slums of Brooklyn in 1901, and he came of age at a time when banks were out of control. Sutton saw only one way out and only one way to win the girl of his dreams. So began the career of America's most successful bank robber. During three decades Sutton became so good at breaking into banks, the FBI put him on its first-ever Most Wanted List. But the public rooted for the criminal who never fired a shot, and when Sutton was finally caught for good, crowds at the jail chanted his name.In J.R. Moehringer's retelling, it was more than need or rage that drove Sutton. It was his first love. And when he finally walked free — a surprise pardon on Christmas Eve, 1969 — he immediately set out to find her.

"Electrifying." —Booklist (starred)"Thoroughly absorbing. . . . Filled with vibrant and colorful re-creations of not one but several times in the American past." —Kevin Baker, author of Strivers Row"[J.R. Moehringer] has found an historical subject equal to his vivid imagination, gimlet journalistic eye, and pitch-perfect ear for dialogue. By turns suspenseful, funny, romantic, and sad—in short, a book you won't be able to put down." —John Burnham Schwartz, author of Reservation Road and The Commoner