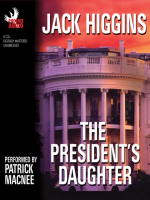 During the Vietnam War, a brave young American saved the life of a French woman whose husband was reported dead. After a brief, passionate affair, the two learned that her husband was indeed alive. Twenty years later, the young man is President of the United States. On a trip to Paris, she comes to meet him with a lovely young person: her daughter, she says... and his. Other are aware of this relationship, and capture the girl, insisting that he not draw in any federal security agencies or she will die. He has ten days to comply with their demands. Only Sean Dillon, the former IRA enforcer turned security specialist, and Blake Johnson, the decorated Marine and FBI agent who heads the elite White House group "The Basement", are capable of saving the girl.