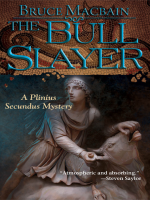 A turbulent frontier province, rotten with corruption and seething with hatred of Rome; a barbarian god whose devotees may include a murderer; a clever and unscrupulous faith healer who knows everyone's secrets; a boy who struggles toward manhood: these are the elements in Pliny's latest investigation.

Newly appointed governor of Roman province Bithynia, Pliny finds a high Roman official murdered on a desolate hillside, miles from the capital. But as Pliny, far from Rome and the Emperor Trajan, pursues one baffling lead after another, he is betrayed where he least expects it: at home.