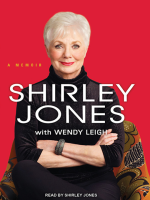 Description
Shirley Jones is an American film legend of the first order, having starred in Oklahoma!, Carousel, and The Music Man, as well as playing her Oscar-winning role as a prostitute in Elmer Gantry long before The Partridge Family. On that iconic show, she portrayed the epitome of American motherhood, a symbol to generations of families in the 1970s, and she remains a cult icon today.But for those who only think of Shirley as the prim and proper Marian the librarian or the chaste and demure Mrs. Partridge, a massive surprise is in store. Here, in this candid memoir, the real flesh-and-blood Shirley Jones is revealed at last.In this hilarious and heartwarming, shocking and intimate memoir, Shirley dishes the raw truth about her own highly charged sexuality, her two husbands-the charismatic and deeply troubled Broadway star Jack Cassidy and the wacky TV comic Marty Ingels-her legendary Hollywood costars, and her interactions with the cast of The Partridge Family, including her rock star stepson David Cassidy.From smuggling marijuana across the Mexican border to infidelity and her wild sexual escapades, movie and television icon Shirley Jones gives us an unparalleled look beyond the America's sweetheart exterior.
Also in This Series