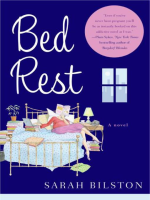 In a charming and witty novel in the tradition of Allison Pearson and Sophie Kinsella, Sarah Bilston tells the story of a busy career woman who finds her pregnancy a breeze -- until she's ordered off her feet for complete and total bed rest.

Quinn "Q" Boothroyd is a young British lawyer married to an American and living in New York City. She's checked off most of the boxes on her "Modern Woman's List of Things to Do Before Hitting 30," and her busy working life has been relatively painless. But when her doctor tells her she must spend the last three months of her pregnancy lying in bed, Q is thrown into a tailspin. Initially bored and frustrated, Q soon fills her days by trying to reconnect with her workaholic husband, provide legal advice for her sweet Greek neighbor, forge new emotional bonds with her mother and sisters, and figure out who will keep her stocked up in cookies and sandwiches.

Q experiences adventures on the couch she never would have encountered in the law firm and learns a lot about herself and what she wants out of life -- above all, about the little one growing inside her.