The Dogs Who Found Me »

The Dogs Who Found Me: What I've Learned from Pets Who Were Left Behind 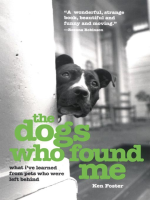 Disaster-prone writer and reluctant dog rescuer Ken Foster never intended to adopt an abandoned dog. But after bringing Brando home, he finds it hard not to notice how many homeless strays there are in the city. Suddenly, he finds them everywhere—from a beagle abandoned in a New York City dog run to a pit bull in a Mississippi truck stop—and finds himself unable to resist taking them home. But what he gains from them in return is far richer than his own expense.

Their circumstances offer a grounding counterpoint to his own misfortunes: the shock of New York City after 9/11, the deaths of two close friends, the evacuation of New Orleans during Hurricane Katrina, and the day his heart nearly stopped for good. He writes eloquently about the world of animal shelters, the nature of compassion, and the empowering effect of rescuing—and being rescued.