An Innocent's Surrender: An Emotional and Sensual Romance 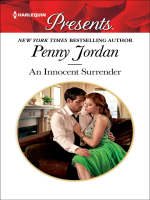 Description
Re-read this classic romance by New York Times bestselling author Penny Jordan, previously
published as A Savage Adoration in 1987
Christy had taken no interest in men since Dominic
Savage's cruel rejection of her teenage advances. She'd vowed she would never be hurt
again.
But now Dominic is back in her life, and this time he seems intent on seduction!
The possessive blaze in his stormy eyes makes it clear that he wants to make her his.
But can Christy bring herself to surrender her heart to him a second time?
Also in This Series