League of denial: the NFL, concussions, and the battle for truth 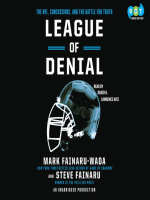 Description
Both ESPN investigative reporters, the authors reveal how the NFL, over a period of nearly two decades, sought to cover up and deny mounting evidence of the connection between football and brain damage. This narrative moves between the NFL trenches, America's research labs and the boardrooms where the NFL went to war against science; it examines how the league used its power and resources to attack independent scientists and elevate its own flawed research.
Also in This Series