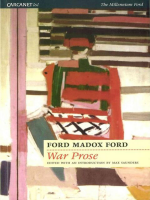 Ford Madox Ford's post-war masterpiece, Parade's End, is recognized as one of the great British novels about the First World War. This selection from his other extensive writings about the war, published and unpublished, sheds light on the tetralogy. It includes reminiscences, an unfinished novel, stories, and excerpts from letters. Ford was in his forties when he enlisted: this made him one of the few writers of his maturity to fight on the Western Front. His experience of combat was limited, but he was in the Battle of the Somme, was often under bombardment, and suffered from shell-shock. His largely psychological response to the war anticipates the recent renewal of interest in trauma and shell-shock. This book provides important testimony by one of the best writers of his generation.