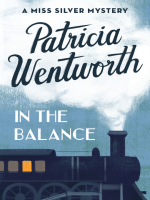 Description
His first wife died suddenly--and his wealthy new bride may be about to meet a similar fate . . . Former schoolteacher Miss Maud Silver is on her way back to London when, with a violent shudder of the train, a young woman is thrust into her compartment. She's beautiful, well dressed, newly married, and wealthy--a lethal combination. In a state of shock, Lisle Jerningham explains that she fled her home in a hurry after overhearing a sinister conversation. Her new husband's first wife died in an apparent accident, and the resultant infusion of cash saved his family home. Now, he's broke again--and attempting to engineer a second convenient mishap. Miss Silver is unsure whether the drama is real or a figment of Lisle's imagination--but if this frightened young lady is a target for murder, the killer will have to deal with the governess-turned-sleuth first. Starring a mature sleuth who "has her place in detective fiction as surely as Lord Peter Wimsey or Hercule Poirot", In the Balance is a classic British mystery ( Manchester Evening News ).
Also in This Series