The Son: A Divergent Story 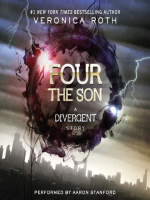 Complete your Divergent library with the Four stories!

Fans of the Divergent series by #1 New York Times bestselling author Veronica Roth will be thrilled by "Four: The Son," the third of four stories, each between fifty and seventy-five pages long, set in the world of Divergent and told from Tobias's perspective.

In "The Son," Tobias struggles to find a place in the hierarchy of the Dauntless. He also begins to suspect that a foul plan may be brewing within the Dauntless leadership and discovers a truth about his past that could greatly affect his future.

And don't miss The Fates Divide, Veronica Roth's powerful sequel to the bestselling Carve the Mark!