The psychopath test: a journey through the madness industry 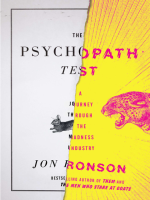