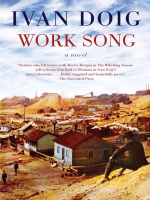 Description
An award-winning and beloved novelist of the American West spins the further adventures of a favorite character, in one of his richest historical settings yet. "If America was a melting pot, Butte would be its boiling point," observes Morrie Morgan, the itinerant teacher, walking encyclopedia, and inveterate charmer last seen leaving a one-room schoolhouse in Marias Coulee, the stage he stole in Ivan Doig's 2006 The Whistling Season. A decade later, Morrie is back in Montana, as the beguiling narrator of Work Song. Lured like so many others by "the richest hill on earth," Morrie steps off the train in Butte, copper-mining capital of the world, in its jittery heyday of 1919. But while riches elude Morrie, once again a colorful cast of local characters-and their dramas-seek him out: a look-alike, sound-alike pair of retired Welsh miners; a streak-of-lightning waif so skinny that he is dubbed Russian Famine; a pair of mining company goons; a comely landlady propitiously named Grace; and an eccentric boss at the public library, his whispered nickname a source of inexplicable terror. When Morrie crosses paths with a lively former student, now engaged to a fiery young union leader, he is caught up in the mounting clash between the iron-fisted mining company, radical "outside agitators," and the beleaguered miners. And as tensions above ground and below reach the explosion point, Morrie finds a unique way to give a voice to those who truly need one. Watch a Video
Also in This Series