Burden of Memory: a mystery 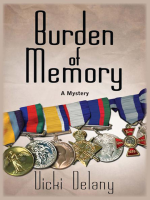 Description
Elaine Benson, a successful novelist who let love in the person of an unreliable screenwriter jettison her career, is now divorced, broke, and come to a "primitive, untamed northern forest" on Lake Muskoka to interview for a job. Elderly Miss Moira Madison of the fabulously rich Canadian family wishes to write her memoirs. Miss Madison isn't interested in a bestseller. She wants to leave a record of her life and most specifically of her years with the Canadian Army Nursing Sisters of World War II. Her service in the British and then European theater was filled with triumphs and bitter losses and forever shaped her life. Can Elaine tell her story working with decades of old documents? Settling into the family "cottage" and what remains of a lifestyle long gone, Elaine reconnects with her love of researching the past. But somehow her project—she soon discovers the first writer hired oddly drowned in the Lake—stirs someone to murder. . . .
Also in This Series