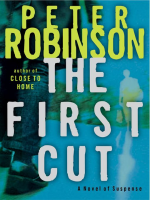 Published in the UK as Caedmon's Song, this is a gripping standalone thriller from New York Times bestselling author Peter Robinson.

On a balmy June night, Kirsten, a young university student, is strolling home through a silent moonlit park when she is viciously attacked.

When she awakens in the hospital, she has no recollection of that brutal night. But then slowly, painfully, details reveal themselves--dreams of two figures, one white and one black, hovering over her; snatches of a strange and haunting song; the unfamiliar texture of a rough and deadly hand . . .

In another part of the country, Martha Browne arrives in a Yorkshire seaside town, posing as an author doing research for a book. But her research is of a particularly macabre variety. Who is she hunting with such deadly determination? And why?

The First Cut is a vivid and compelling psychological thriller, from the author of the critically acclaimed Inspector Banks series.