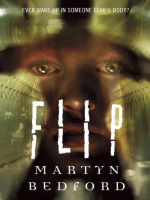 Description
"Flip is captivating from beginning to end, with rich characters and a fascinating mystery. . . . Highly recommended!" —James Dashner, author of the Maze Runner series
What does it mean to have a soul whose will to live knows no limits?
One morning fourteen-year-old Alex wakes up to find himself in the wrong bedroom, in an unfamiliar house, in a different part of the country. Six months have disappeared overnight. The family at the breakfast table? Total strangers.
And when he looks in the mirror, another boy's face stares back. A boy named Philip, known as Flip. Unless Alex finds out what's happened and how to get back to his own life, he'll be trapped forever inside a body that belongs to someone else.
Martyn Bedford's debut novel for young adults is fearless and fast-paced, a riveting psychological thriller about a boy coming undone in the most extraordinary of circumstances.
Praise for Flip
A Junior Library Guild Selection
A School Library Journal Best Book of the Year
"The mysteries are countless: What is a soul? Where does it go when its human host ceases to function? Bedford adeptly sweeps the existential curtain aside and tackles these heavy questions as the tension soars." —Kirkus Reviews, Starred
Also in This Series