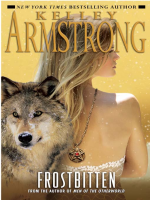 For Elena Michaels, being the world's only female werewolf has its advantages, such as having her pick of the Otherworld's most desirable males. And she couldn't have picked a more dangerously sexy and undyingly loyal mate than Clayton Danvers. But now their bond will be put to the ultimate test. A werewolf more wolf than human and more unnatural than supernatural--a creature whose origins spring from ancient legend--is hunting human prey, and Elena and Clayton must track the predator deep into Alaska's frozen wilderness.But the personal stakes are even higher. Either Clayton or Elena has been chosen to become the new Pack leader, and every wolf knows that there can be only one Alpha. The couple have always been equals in everything. Now, when their survival depends more than ever on perfect teamwork, will instinct allow one of them to lead and the other to follow?