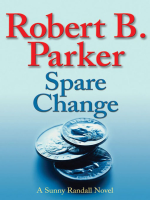 Description
Boston P.I. Sunny Randall joins forces with the most important man in her life—her father—to crack a thirty-year-old case.When a serial murderer dubbed "The Spare Change Killer" by the Boston press surfaces after three decades in hiding, the police immediately seek out the cop, now retired, who headed the original task force: Phil Randall. As a sharp-eyed investigator and a doting parent ("You're smart. You're tough . . . You, too, are a paradigm of law enforcement- perfection, and you're my kid"), Phil calls on his daughter Sunny to help trap the criminal who eluded him so many years before.After interviewing just a handful of suspects, Sunny is certain that she's found her man. Though she has no evidence against Bob Johnson, she trusts her intuition. And she knows the power she has over him—she can feel the skittishness and sexual tension that he radiates when he's around her—but convincing her father and the rest of the task force is a different story.When the killer strikes a second time and a third, the murders take a macabre turn, as, eerily, the victims each resemble Sunny. While her father pressures her to drop the case, her need to create a trap to catch her killer grows.In a compelling game of cat-and-mouse, Sunny Randall uses all her skills to draw out her prey, realizing too late that she's setting herself up to become the next victim.
Also in This Series