The preacher: a novel 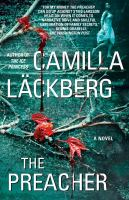 Description
In the fishing community of Fjallbacka, life is remote, peaceful, and for some, tragically short. Foul play was always suspected in the disappearance twenty years ago of two young campers, but their bodies were never found. But now, a young boy out playing has confirmed the grim truth. Their remains are discovered alongside those of a fresh victim, sending the tiny town into shock. Local detective Patrik Hedstrom, expecting a baby with his girlfriend Erica, can only imagine what it is like to lose a child. When a second young girl goes missing, Hedstrom's attention focuses on the Hults, a feuding clan of misfits, religious fanatics and criminals. The suspect list is long but time is short--which of this family's dark secrets will provide the vital clue?Praise for The Ice Princess:"The hottest crime genre of the moment is Nordic noir and Swedish writer Camilla Läckberg (who shares Stieg Larsson's translator) is one of the reasons. As with all Scandinavian murder mysteries, it's darker, bleaker, and the plot far more sinister than similar American fare. Larsson fans who give Läckberg's novel a chance to seduce them will be rewarded."--USA Today"At the start of Läckberg's haunting U.S. debut, biographer Erica Falck feels compelled to write a novel about why her beautiful friend Alex would kill herself. Läckberg skillfully details how horrific secrets are never completely buried and how silence can kill the soul."--Publishers Weekly, starred review"Camilla Läckberg has written seven blockbuster novels in her native Swedish but, until now, no one has published any of them in the United States. Now Pegasus Books has stepped forward."--The New York Times"Heart-stopping--a masterclass in Scandinavian crime fiction."--Val McDermid
Also in This Series