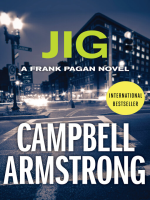 A British counterterrorism agent forms an extraordinary alliance with the IRA's most skillful assassin in this international bestselling thriller. A leaky old ship has reliably ferried tons of important freight from America to the Old Country in its decades of service to the Irish Republican Army, from automatic rifles to deadly assassins. Now it is berthing with especially precious cargo: couriers holding briefcases filled with millions of crisp American dollars. In one blinding firefight, the shipment is hijacked. The terrorists trust only one man to go after their money—Jig the dancer, their most reliable assassin, who kills without harming the innocent. Hot on Jig's trail is Scotland Yard's renegade detective Frank Pagan, who suspects an inside job. The dark path of hunter and hunted takes the two men through the minefields of the IRA's war and across the Atlantic to America, where Pagan and Jig are forced to postpone their duel and work together to solve a savage puzzle. Jig is the 1st book in the Frank Pagan Novels, but you may enjoy reading the series in any order.