We need to talk about Kevin »

We need to talk about Kevin: a novel 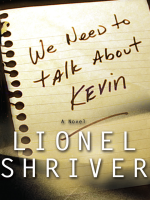 A stunning examination of how tragedy affects a town, a marriage, and a family, for readers of Rosellen Brown's Before and After and Jane Hamilton's A Map of the World . That neither nature nor nurture bears exclusive responsibility for a child's character is self-evident. But such generalizations provide cold comfort when it's your own son who's just opened fire on his fellow students and whose class photograph--with its unseemly grin--is blown up on the national news.The question of who's to blame for teenage atrocity tortures our narrator, Eva Khatchadourian. Two years ago, her son, Kevin, murdered seven of his fellow high-school students, a cafeteria worker, and a popular algebra teacher. Because he was only fifteen at the time of the killings, he received a lenient sentence and is now in a prison for young offenders in upstate New York.Telling the story of Kevin's upbringing, Eva addresses herself to her estranged husband through a series of letters. Fearing that her own shortcomings may have shaped what her son has become, she confesses to a deep, long-standing ambivalence about both motherhood in general and Kevin in particular. How much is her fault? We Need to Talk About K