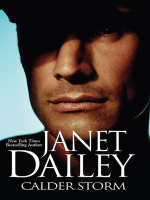 Description
With his rugged-cowboy good looks and the kind of smile that makes a lady's pulse race, Trey Calder could have his pick of women. But he's been holding out for someone special, and the minute he lays eyes on freelance photographer Sloan Davis, he knows he's found her. The attraction between the two is immediate and charged as heat lightning, even if they are as different as can be. But Trey's fierce passion may blind him to a terrible threat.

Within weeks Trey and Sloan are married, settling into a new life together at the Triple C. For the orphaned Sloan, being welcomed into Trey's family is a dream come true, and with a baby on the way things couldn't get any better…until Trey makes a startling discovery about his new wife, one that casts doubt about just who Sloan Davis is and what she's really after. Rumors are spreading about Trey, too. Soon passion turns to suspicion. A dangerous game is set in motion. And the stakes are high—everything the Calders have worked for over the generations is on the line.

A formidable enemy has been waiting for the perfect time to strike. Someone who has sworn vengeance on the Calder family. Someone who will use whatever means necessary to control their land, their lives, and their legacy forever. Someone who would even kill to make it happen. All his life, Trey Calder has been trained to take over his family's ranch, to protect what is theirs. Now the time has come for a Calder son to make a stand and hope that his way is the right way after all…

Filled with passion, suspense, heartbreak, and hope, Calder Storm is an enthralling story about an unforgettable American family as bold as the land they love.
Also in This Series