Seduction of a Highland... »

Seduction of a Highland Warrior 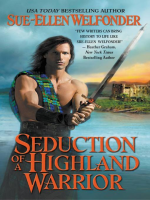 At the King's request, chieftain Alasdair MacDonald has sworn to preserve the peace in the Glen of Many Legends. Though he's handsome and fearless, his warrior's heart belongs only to his beloved land-until the fair sister of his oldest enemy shatters his defenses, branding his skin with a single touch, and sealing his fate with one stolen kiss . . . Lady Marjory Mackintosh will do anything to unite the warring clans, even seduce Alasdair MacDonald. She has loved the rugged Highlander since she first saw him and now, as temptation leads to surrender, Marjory dares to possess him, body and soul. But a dangerous new menace enters the Glen, and he will stop at nothing to strip Alasdair of his honor-and the only woman who can claim his heart.