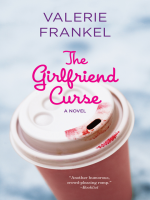 It's uncanny! Within six months of breaking up with her, Peg Silver's ex-lovers always meet and marry the women of their dreams. Even worse than being the eternal bridesmaid, she's the last girlfriend, the one who awakens in a guy the knowledge of what he's always wanted in a relationship ... and it's never with Peg. Obviously, a major lifestyle change is seriously called for, which is why the distraught interior landscape designer says good-bye to Manhattan and late-night lattes with pal Nina, and hello to a farmhouse on ten acres in tiny, backwater Manshire, Vermont, hoping to meet the ultimate, all-organic country man (without too much facial hair) to keep her warm in those frosty New England winters.

Instead, Peg finds herself at Inward Bound -- a proactive adult-education retreat for the hapless and hopelessly lovelorn -- to try to lift her dreaded "girlfriend curse." A steamy (and expressly forbidden) dalliance with gorgeous woman-eater Ray probably isn't going to help cure her. But some romantic insight could arise from her attraction to Linus, Inward Bound's sexy, scruffy, smart and still-single founder. Perhaps there is a secret to be unearthed in the crunchy Green Mountains, one that will magically transform Peg Silver from the Perpetual Also Ran to the Big Winner in love.