Nefertiti: The Book of the Dead 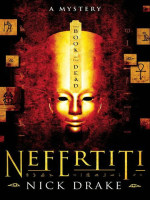 She is Nefertiti—beautiful and revered. With her husband, Akhenaten, she rules over Egypt, the most affluent, formidable, sophisticated empire in the ancient world. But an epic power struggle is afoot, brought on by the royal couple's inauguration of an enlightened new religion and the construction of a magnificent new capital. The priests are stunned by the abrupt forfeiture of their traditional wealth and influence; the people resent the loss of their gods—and the army is enraged by the growing turbulence around them. Then, just days before the festival that will celebrate the new capital, Nefertiti vanishes.

Rahotep, the youngest chief detective in the Thebes division, has earned a reputation for his unorthodox yet effective methods. Entrusted by great Akhenaten himself with a most secret investigation, Rahotep has but ten days to find the missing Queen. If he succeeds, he will bask in the warmth of Akhenaten's favor. But if Rahotep fails, he and his entire family will die.