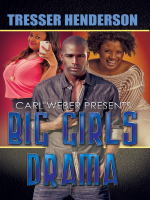 Description
Whether it's being told you have to purchase two seats on an airplane or getting dirty looks when you're with a handsome man, being a big girl in a superficial world can come with more issues than any woman should have to deal with. Add to that some over-the-top family and marriage issues, and you have the perfect recipe for some Big Girls Drama.

When Vivian married Sheldon, she thought she would be spending life with her best friend, but now she is facing a dreadful problem: a sexless marriage. Whenever she tries to reach for him in the night, Sheldon attacks her. Is he no longer attracted to her? Is he having an affair? Vivian is sinking into depression, and she becomes determined to figure out what secret her husband is hiding.

Monica's husband Devin has been very clear about why he's not interested in her anymore. She tries to make things work with him, but when he calls out another woman's name one night, it's the final straw. Monica summons her inner strength and goes from dutiful wife to a sista out for revenge.

Kelly has also found out that her husband is having an affair—with a man. Now he wants to move the man in and introduce him to neighbors as Kelly's cousin. She's not going for it, and things soon go from bad to worse when she learns some even more devastating information about her husband.

Sonya is single, so she doesn't have the marital woes that her friends do, but raising a teenage daughter alone comes with its own set of problems. When she discovers that her daughter is pregnant, she's heartbroken, but when she finds out who the father might be, pandemonium ensues.