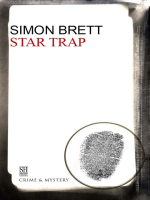 Joining the cast of a musical loosely based on She Stoops to Conquer, actor/detective Charles Paris is soon regretting his decision, irked as he is by the odious theatre and television star who is backing, producing and starring in the show. But when rehearsals are hampered by a strange series of mishaps, including the rehearsal pianist being shot in the hand and an actor falling and breaking his leg, Paris investigates and quickly decides that the star himself is responsible. But why would he want to sabotage his own show? The answer is much more human than it first appears.