Twice a Spy: A Novel 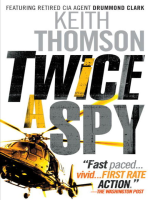 On the heels of Once a Spy, which PW hailed as a "wildly original debut [with] an action-packed story line," Keith Thomson returns with a breakneck thriller that's twice as explosive as the original.

In the tradition of Robert Ludlum, with a witty twist, Thomson's second novel featuring a former spy and his son once again poses the question: What happens when a former CIA agent can no longer trust his own mind?

Charlie and Drummond Clark are now in Switzerland, hiding out from criminal charges in America and using the time to experiment with treatments to retrieve Drummond's memory. When NSA operative Alice Rutherford, with whom Charlie has fallen in love, is kidnapped, the Clarks must dodge a formidable CIA case officer and his team to get her back.