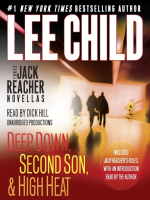 Description
Deep down: Jack Reacher must track down a spy in soldier's clothing, by matching wits with four formidable females. Three are clean, but the fourth may prove fatal.
Second son: A young Jack Reacher knows knows how to finish a fight so it stays finished. He knows how to get the job done so it stays done. And, in one of his earliest challenges, he knows that his analytical brain is just as important as his impressive brawn.
High heat: In the midst of a savage heat wave and an infamous murder spree, a blackout awakens the dark side of the city that never sleeps, and a young Jack Reacher takes action as only he can
Also in This Series

From the Playaway - Unabridged.