The Miser of Mayfair »

The Miser of Mayfair: A Novel of Regency England - Being the First Volume of A House for the Season 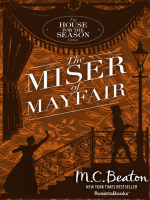 Description
The New York Times -bestselling author presents a delightful series in which the staff in a London town house helps with much more than the daily chores . . . It was the fashion during the Regency era to hire a house for the season in Mayfair--the heart of London's West End--at a disproportionately high rent for sometimes very inferior accommodation. But Number 67 Clarges Street, a town house complete with staff, has remained vacant season after season, as the history of the house and rumors of bad luck dissuade potential renters . . . Salvation seems to come at last in the form of Mr. Roderick Sinclair, who has confirmed his intentions to let the house for the season. The servants are overjoyed--until they find that Mr. Sinclair is a terrible miser and is planning no parties. Furthermore, his ward, Fiona, seems not to have a bright idea in her head. But Rainbird, the clever and elegant butler, plots with Fiona to bewitch, bedazzle, and confuse the earl into seeing things their way . . . "A romance writer who deftly blends humor and adventure." -- Booklist Previously published under the name Marion Chesney
Also in This Series