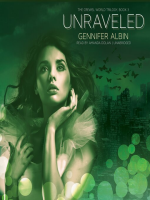 In the breathtaking conclusion to the Crewel World trilogy, the threads of rule and order start to unravel.

Autonomous. Independent. Dangerous. They tried to control her. Now she'll destroy them.

Things have changed behind the walls of the Coventry, and new threats lurk in its twisted corridors. When Adelice returns to Arras, she quickly learns that something rotten has taken hold of the world, and now Cormac Patton needs her to help him reestablish order. However, peace comes at a terrible price. As the Guild manipulates the citizens of Arras, Adelice discovers that she's not alone, and she must let go of her past to fight for mankind's future. She will have to choose between an unimaginable alliance and a deadly war that could destroy everyone she loves.