The Other Barack: The Bold and Reckless Life of President Obama's Father 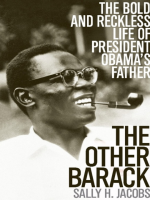 Description
The life story of the father of the most powerful elected leader in the world is an epic tale, one as daring as it was improbable.

The father of the U.S. president, the first Barack Hussein Obama, was born in rural poverty in Kenya. His own father was a dominating figure who worked as a cook for the British colonists and broke with Luo tradition when he converted to the Muslim faith. Their household was a severe one from which Barack’s mother fled in fear for her life. Despite such domestic turmoil, Barack was as fiercely smart as he was intrepid. Admitted to one of Kenya’s premiere private schools, he was later thrown out for his defiant behavior.

Adrift in the political churning of Kenya’s pre-independence days, Barack attracted the interest of an American literacy worker who took him under her wing. By day, they worked on the literacy primers that would change the lives of illiterate Africans. By night, they often went dancing in the full glare of disapproval of those racially segregated times. She helped him prepare for college in America and in 1959 paid his first year’s tuition at the University of Hawaii.

The first African student on the UH campus, Barack stood out in many respects. One of those was the young white woman, Ann Dunham, whom he began to date. A year after they met, the couple had a son named Barack Hussein Obama II. Barack did not tell his young wife about the two children he had left behind in Kenya, nor did he tell university authorities about his family back home until much later. Luos were often polygamous and Obama saw no need to part with custom.

At Harvard University, Barack joined the academic elite and prepared to take his place among the big men in newly independent Kenya. But Barack’s experience at Harvard was emblematic of a life that seesawed between high hopes and cruel frustrations, many of them self-inflicted in drunken furies. Yet the charm, the intellectual brilliance, and the fierce pride in his vision of independent Kenya never flagged. He was a bold and reckless man, whose life courted controversy and ultimately veered fatally out of his control. He was heroic in his ambition, deeply flawed, and, extraordinarily, the father of an American president, the other Barack.
Also in This Series