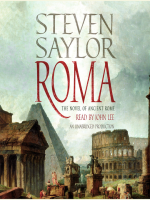 Description
Spanning a thousand years, and following the shifting fortunes of two families through the ages, this is the epic saga of Rome, the city, and its people.

Weaving history, legend, and new archaeological discoveries into a spellbinding narrative, critically acclaimed novelist Steven Saylor gives new life to the drama of the city’s first thousand years——from the founding of the city by the ill-fated twins Romulus and Remus, through Rome’s astonishing ascent to become the capital of the most powerful empire in history. ROMA recounts the tragedy of the hero-traitor Coriolanus, the capture of the city by the Gauls, the invasion of Hannibal, the bitter political struggles of the patricians and plebeians, and the ultimate death of Rome’s Republic with the triumph, and assassination, of Julius Caesar.

Witnessing this history, and sometimes playing key roles, are the descendents of two of Rome’s first families, the Potitius and Pinarius clans: One is the confidant of Romulus. One is born a slave and tempts a Vestal virgin to break her vows. One becomes a mass murderer. And one becomes the heir of Julius Caesar. Linking the generations is a mysterious talisman as ancient as the city itself. Epic in every sense of the word, ROMA is a panoramic historical saga and Saylor’s finest achievement to date.
Also in This Series