The Longest Winter: The Battle of the Bulge and the Epic Story of WWII's Most Decorated Platoon 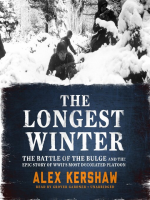 December 1944: Deep in the Ardennes forest, a platoon of eighteen men under the command of twenty-year-old lieutenant Lyle Bouck huddle in their foxholes. Under attack and vastly outnumbered, they repulse three German assaults in a fierce day-long battle, killing over five hundred Germans. Only when Bouck's men run out of ammunition do they surrender. As POWs, Bouck's platoon experience an ordeal far worse than combat: trigger-happy German guards, Allied bombing raids, and a daily ration of thin soup. Somehow, the men of Bouck's platoon all miraculously survive. Alex Kershaw brings to life the story of America's most decorated small unit of the war, and one of the most inspiring stories in American history.