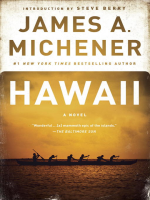 Description
European explorers imagined the Pacific islands might be home to Rousseau's "noble savage." But all disappointed, save one...Hawaii.

It was the Polynesians who gave Hawaii its special flavor. Their ethos, alive and well two centuries after coming to terms with an invasion of Anglos and Asians, sets the tone in our 50th state.

James A. Michener counterpoises the slumbering eons before Hawaii's discovery with the dynamic era that followed. As the Chicago Tribune said on the book's publication, "A tremendous work -- thrilling, vivid and stupendous."