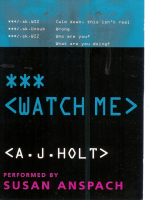 FBI Special Agent Jay (nee Janet) Fletcher is an agency hacker who can use computer to find out anything about anybody, but her failure to go through proper channels gets her bounced from Washington, D. C. to Santa Fe. The arson detail that's supposed to keep her out of trouble lacks excitement, so she hones her computer skills by tracking an ongoing investigation into Las Vegas's own serial killer. What Jay thought was just exercise turns into online terror when she discovers that the murderer, with his 20-year history of grisly crimes, is hooked into a secret network of gruesome criminals like himself who play an all-too-realistic computer simulation game. As her recreational hacking turns into a full-out personal quest, Jay quickly leaves behind the safe boundaries marked by warrants, Bureau procedure and due process. While Jay and the Killer move ever closer toward a shattering confrontation, with Jay's former colleagues close behind, thought-provoking questions become as compelling as the deadly game itself: What is Jay Fletcher exactly- an angel of justice or a killer no different from the man she hunts? And just whose side should the law be on? .