If I Did It: Confessions of the Killer 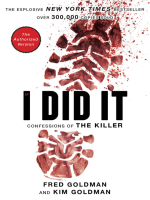 Get the full story in O.J. Simpson's own words!

On July 31, 2007 Federal Court Judge A. Jay Cristol awarded the Goldman family the rights to If I Did It. Thus began one of the strangest odysseys in publishing history.

The book, called "one of the most chilling things I have ever read" by Barbara Walters, skyrocketed up bestseller lists across the country in fall 2007 as the national media relentlessly covered O.J. Simpson's dramatic Las Vegas arrest for armed robbery and kidnapping.

Originally written by O.J. Simpson, this edition includes essays by the Goldmans and a member of the Goldman family legal team that reveal the fascinating story behind the bankruptcy case, the book's publication and the looming court proceedings, that would eventually lead to his conviction.

In 1994, Ron Goldman and Nicole Brown Simpson were brutally murdered at her home in Brentwood, California. O.J. Simpson was tried for the crime in a case that captured the attention of the American people, but was ultimately acquitted of criminal charges. The victims' families brought a civil case against Simpson, which found him liable for willfully and wrongfully causing the deaths of Ron and Nicole committing battery with malice and oppression. In 2006, HarperCollins announced the publication of a book in which O.J. Simpson told how he hypothetically would have committed the murders. In response to public outrage that Simpson stood to profit from these crimes, HarperCollins canceled the book.

The Goldman family views the book as his confession, and has worked hard to ensure that the public will read this book and learn the truth. This is O.J. Simpson's original manuscript, approved by him, with up to 14,000 words of additional key commentary.